Since I wrote the first part of this Saga last year, a lot of things have happened. If you are a regular reader of my blog, you'd know my health hasn't been stellar over the last year. I added multiple ailments to my roster. 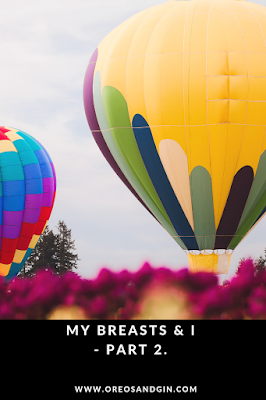 The results for the previous Mass came through as not Malignant (YAY!) since then I've had various recurrences in both breasts (6 Core Biopsies, 1 Mammogram ) I had a wide excision about a month and a half ago where the surgeon attempted to get rid of most of the masses.


A week later at my Post OP Check up, I was distraught to find out he didn't take all the masses in there because I knew we'd only end up back where we begun. After he left and suggested a "wait and see " approach, I broke down crying in front of the nurses in the room because it just seemed like all the pain, suffering I had endured was never going to end.

A week later, I had another mass begin to form. I was right. I was bloody right. Back to the start except now I had a disfigured right breast. Thankfully, the next time I was back up there, I saw my actual consultant. I told him I had a new mass. He has 40 years experience and I'm only 1 of 2 people he's ever seen this on. My immune system is just too aggressive. I asked for a Mastectomy. He agreed. I had two weeks before we met again . I learnt a lot. I'm grateful for all the people who have been through this before who have shared their experiences with me.

On Wednesday, I went for my Ultrasound , Core Biopsy & finally THE CHAT.
M, my hubby was with me and by the end of it all, I had a date for a Double Mastectomy.

I've got just under a month left before that date.

I'm at this point feeling quite ambivalent - a mixture of relief and sadness. I just want to draw a line under all this and move on with my life.