May 31, 2020
On Sunday the 3rd of May, 2020, I woke up early after continuous vivid pregnancy dreams. It was about 4.30 am that I decided I had enough. I had dreamt that Ada came early and that we were not ready at all . If only I knew the half of it.

Mark made us breakfast and we watched Guardians of the Galaxy. I was feeling odd but not sure why so I took a nap once the film was over. Whilst sleeping, I felt a bulging but dismissed it as me needing a wee.  A few moments later, my waters went. I momentarily freaked out. I was only 35+3 weeks pregnant , nowhere near term.

I tried to get Mark’s attention via the Alexas in the house. He finally came up with cups of tea not realising the urgency I had wanted him up for.  I told him my waters had gone and I started to sob. He managed to calm me down enough to ring the maternity ward and they said we should come in . Before we got there, we had to organise childcare and our lovely babysitter Charley was available as planned. We drove the children to Charley‘s house and then straightaway her dad drove them back to our house and then Mark and I went off to hospital.

Because of the coronavirus Mark was not allowed up so I had to go into the maternity ward on my own. Once there I was put on the CCG monitor whilst a midwife tried to ascertain whether I had actually lost my waters or not. I am known for my spectacular loss of waters so I was very sure that that’s 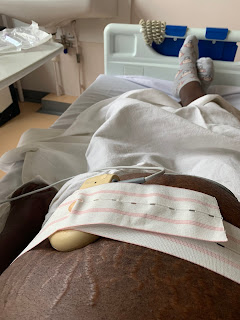 what happened still they had to do a swab test as the pad that I had on wasn’t that full but that was because Most of it was on my bed. Swab test came back positive for waters but there was no tightenings. The consultant came to see me and he was talking about how this is that wasn’t going to happen tonight but I knew he was wrong I don’t know how but I knew he was wrong.

At about 5pm I had my first contraction and at first I was just breathing through them and everything was fine but around 7pm things ramped up and I could no longer breathe through them. A midwife got me some gas and air and that stuff my friends is lovely. At 8:30 we were about to go to theatre so they transferred me to the labour ward and asked me to get Mark in.

At the back of my mind I was worried that he was going to miss it because things seemed to get more intense. I was using all my hypnotherapy techniques as well as my gas and air but things seem to be coming to head for me and I was really worried, I remember thinking I just needed a spinal in so I could have some rest . Once Mark came I was so much more relaxed and I was actually quite ready to meet my baby.

I was prepped for the Caesarean section and this was gonna be my final section as I was also sterilised. It felt kind of momentous but not in a hyperbolic way, because bear in mind I’ve had five years to get used to the idea of not having babies anymore so this was just a formality even so I had to laugh when the surgeon had to confirm whether I did want this done and I was thinking “heck yeah I want it done! my body can’t go through pregnancy again”.
Once everybody was done getting ready, I played the playlist on Spotify that I created for this birth and it was just the best way to welcome our little girl into the world.

Ada Grace was born to the sound of Tim McGraw singing Little Girl. If ever there was a song that summed up what I want for her this was it. I reminded Mark that he needs to take some photos I think he was a bit bewildered because with Levi there was loads of photos but with Ada there was only 6.

And she was out.

She did a half-hearted cry and she was gone - that’s the difference between the boys’ birth and hers. I didn’t get to see her, I didn’t get to smell her, I didn’t get to touch her, she was just gone. It was the weirdest thing and I felt like I was observing someone else’s life. Once I was done in theatre I was taken to the recovery room where Mark and I spent the next two hours. A 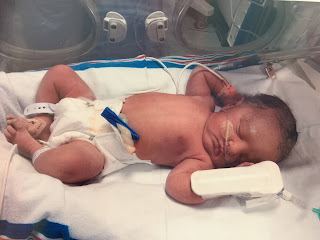 SCBU nurse brought in a Polaroid of Ada for us which I thought was the sweetest thing.

That was the first time I saw my daughter’s face.

At about midnight Mark was effectively asked to leave because it was time for me to go to the maternity ward but before that I was wheeled in to see her. She was in an incubator with loads of tubes coming in and out and around her but still I got to see her which was the amazing thing.

It was so odd going to sleep alone that night. No husband, No Baby.
Overnight, I spiked a temperature which triggered a “suspected sepsis” diagnosis. I felt clammy but fine. With Levi, I also got sepsis but it was the worst pain ever. So it was very strange that I apparently had it but aside from my section wound, and my joints... nothing was out of the ordinary. I had hourly observations and IV antibiotics throughout the night and day. 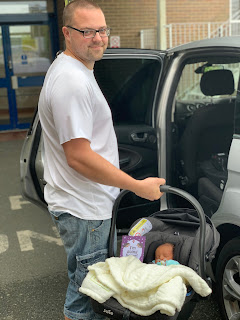 We ended up spending a week in hospital mostly due to Ada’s bilirubin levels, there’s other things that happened but I just can’t bring myself to relive them just yet.

The most important thing is that on Sunday the 10th of May, one week after she was born, Miss Ada passed all her tests and was allowed to come home. That day, her daddy got to cuddle her for the first time and she got to meet her brothers too.

I have been reflecting on my birth stories and each one has taught me something different and I’m grateful for them all. 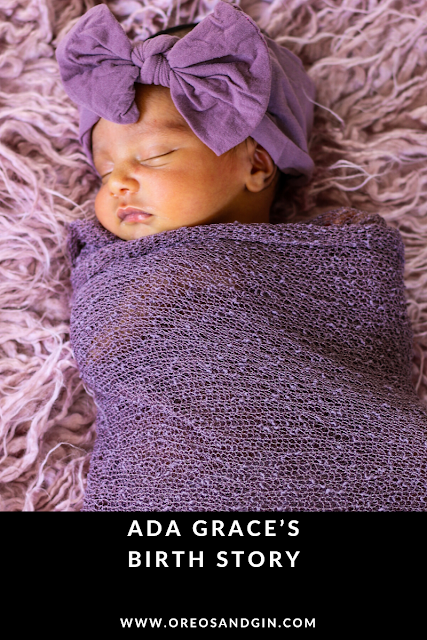